This relates to global warming, obviously, but needs a separate topic, as we struggle to cut down our consumption.'

From the other thread:

Brian Peacock wrote: ↑
Sun Jan 12, 2020 2:56 pm
Greta's protest started because, being a bit of a science nerd, she noticed that the Swedish government weren't acting on their own analysis of climate science or living up to their rhetoric on the environment. <snip>

All in all the effort in Europe has been pitiful. Sweden is ahead of most but still uses a lot of energy. Being so far North, heating is unavoidable, though new housing could be planned.
https://en.wikipedia.org/wiki/Energy_in_Sweden
35% is nuclear. They had planned to get rid of it but obviously can't. We will hang on to nuclear and build smller, safer reactors (Thorium?)
"Hydroelectric power in Sweden accounts for more than half of energy production." this is good, most countries do not have that.
" The emissions per capita were in Sweden 5.58 and in Finland 9.93 tonnes per capita in 2009.2
That is due to the lack of hydroelectric. Finland should dump coal and go all propane. But with Putin in power, unlikely. They have no fossil fuels other than trees. peat maybe. Really not renewable, peet.

Germany:
https://en.wikipedia.org/wiki/Energy_in_Germany
As of 2016, around 40% of the electricity in the country is generated from coal.[12] This was slightly down from 2013, when coal made up about 45% of Germany's electricity production (19% from hard coal and 26% from lignite)
Last edited by Tero on Sun Jan 12, 2020 6:12 pm, edited 1 time in total.
https://esapolitics.blogspot.com 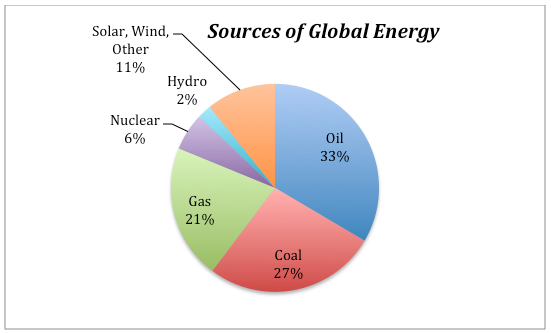 Unfortunately, reality begs to differ from the ambitions of politicians and the sincere desires for a cleaner future of millions of people. The world had total renewable energy capacity of 2.356 million MW at the end of 2018, up from 1.135 million MW in 2009, according to data from IRENA.

These hit a record high in 2018 despite the growing adoption of renewable energy and are now expected to have broken this record in 2019. The culprits: China and India along with other developing nations with heavy industries that require cheap and reliable power, which most renewable installations cannot guarantee for lack of storage capacity.

The good news, according to the Global Carbon Project that tracks emissions, is that despite the record-high level of emissions, the increase is slowing down. Fossil fuel-related emissions rose 2 percent in 2018 but are expected to have added just another 0.6 percent in 2019.
https://esapolitics.blogspot.com

The next twenty years will be completely unlike the last twenty years.
The world is in economic crisis, and there are no easy fixes to our predicament. Unsustainable trends in the economy, energy, and the environment have finally caught up with us and are converging on a very narrow window of time—the "Twenty-Teens." The Crash Course presents our predicament and illuminates the path ahead, so you can face the coming disruptions and thrive--without fearing the future or retreating into denial. In this book you will find solid facts and grounded reasoning presented in a calm, positive, non-partisan manner.

Our money system places impossible demands upon a finite world. Exponentially rising levels of debt, based on assumptions of future economic growth to fund repayment, will shudder to a halt and then reverse. Unfortunately, our financial system does not operate in reverse. The consequences of massive deleveraging will be severe.

Oil is essential for economic growth. The reality of dwindling oil supplies is now internationally recognized, yet virtually no developed nations have a Plan B. The economic risks to individuals, companies, and countries are varied and enormous. Best-case, living standards will drop steadily worldwide. Worst-case, systemic financial crises will toss the world into jarring chaos.

This book is written for those who are motivated to learn about the root causes of our predicaments, protect themselves and their families, mitigate risks as much as possible, and control what effects they can. With challenge comes opportunity, and The Crash Course offers a positive vision for how to reshape our lives to be more balanced, resilient, and sustainable.

I ordered it. Funny, a bunch of these books offer all kinds of solutions, but no matter how many books I buy, the world does not change one bit! I could technically read them all, dig a big hole about 10 foot deep and bury them. Would qualify as carbon sequestering.
https://esapolitics.blogspot.com

Living standards are not necessarily equated by consumption. One can be quite content tending a vegatable patch, rather than rushing off to buy the latest gadget.

We have too much stuff, we don't feel better having more.
I call bullshit - Alfred E Einstein
Top

That is going to be the difficult thing.
Kids: what ? You mean I have to WALK to school? It's over a mile, almost two!
https://esapolitics.blogspot.com

Not here but once again sweeping statements. Kids here in the countryside regularly cycle 15 kms. to school. In the cities it is about 3 kms. Not all countries are like the USA. (TG!)
"Wat is het een gezellig boel hier".
Top

Do not be alarmed, I'm popping a gender reveal cannon.
Top

There is a bit of a problem in an economist making such long term projections. There are lots of facts on energy, food, populations and all that, so I will be keeping this as a reference book. The problem is that we cannot consume our way out of this problem. The finances and economics are going to have to follow some new rules, after we have maxed out population and food sources. It will be a frugal world, and many parts that are currently developing will be in a state of partial development and will stop there. It may be just as well, as they will be able to solve problems in their own way, politics and available technology.

It has been obvious to many authors for a while that state run economies such as China will be able to make quicker changes than we in the USA will.
There are possible energy solutions, such as fusion power, that will come in at some point in this century. After some decades of rejection, all solutions still working will be applied.
I give the author and publisher a lot of credit in using illustrations to clarify most of the points made.
https://esapolitics.blogspot.com

The Chinese are going to destroy the entire fucking planet. Now there's a new coronavirus spreading like wildfire.

We need to stop them before they kill and eat ALL of us.
Yeah well that's just, like, your opinion, man.
Top